MARAMAG, Bukidnon – The Fraternal Order of Eagles-Maramag Club will be holding its medical-dental mission for 100 less fortunate people in Maramag town on October 26 as part of the highlights of its 2nd year chapter anniversary.
Maramag Eagles Club President Christian Lear F. Miquiabas is extending his warm thanks to fellow Eagle brothers and partners who unselfishly devote efforts for the success of the 2nd Club Founding Anniversary.
The Fraternal Order of Eagles is the first Philippine-born fraternal socio- civic organization guided by strong brotherhood and service to the community that has chapters throughout the country.
Miquiabas said United Opposition Alliance (UNA) senatorial bet Juan Miguel Zubiri will address the affair as keynote speaker. National Eagles president Salvador Ramos, Efren Camaro- Regional Governor NMR1, members of eight active clubs in Bukidnon as well as other Eagles Club presidents in Mindanao will attend the event. 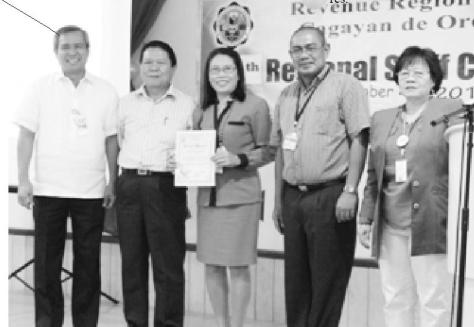 Revenue District Officer Myrna Bernardo of RDO 99, Malaybalay City was awarded a certificate of recognition by Regional Director Alberto Olasiman for registering the highest percentage of collection against goal in the region for the period January to August 2012. RDO 99 exceeded the cumulative collection goal as of August by P38.6Million or 6%. In photo: RD Alberto Olasiman, RDO Myrna Bernardo, ARDO Mama Sanggacala, Collection Division Chief, Blandina Florante. The recognition was given during the 9th regional staff conference last September 20, 2012 in Cagayan de Oro City.

MALAYBALAY CITY – Bureau of Internal Revenue District Office No. 99 is the region’s top tax collection performer for four consecutive months since May.
We have reached the peak and able to surpass our tax collection target, said Chief Collection Section Head Aurora Sualan
For the month of September, BIR Bukidnon overshot the target goal of P70,441,000.00 with actual collection of P80,403,200.45 or an excess of P11,962,200.45 or 16%. Prior ollection is P62,646,900.65, an increase of P19,756,299.80.
`In cumulative comparative collections as of September, the revenue district reached the P764,216,788.01 against the cumulative goal of P713,661,000.00 with an excess of P50,555,788.01.
Revenue District Officer Myrna Bernardo said she owes the good performance to taxpayers who religiously pay their tax obligations and to a continuing massive tax info drive and seminars.
Assistant Revenue District Officer Mike Sanggacala said double efforts by office tax personnel is aimed to help national government by pursuing collection targets set by BIR Commissioner Kim Henares.

VALENCIA CITY – Former Bukidnon Vice Governor Wenifredo Agripo and first termer Valencia City Councilor Rogelio Roque will fight it out in the May election next year for representative of the newly-created Bukidnon 4th District.

But another aspirant, Incumbent City Councilor Peduche has missed the boat having been beaten by the October 5 deadline of filing Certificate of Candidacy (COC).
Agripo and Roque have filed their COCs as aspirants for the Congress seat in the 2nd District, but will be running now in the 4th District which covers Valencia City, Pangantucan and Kalilangan.
The Commission on Elections has issued Resolution No. 9539 spelling out rules for candidates for representative of the new district.
Under the rules Agripo and Roque are now candidates for the 4th District Congress having filed their COCs for the 2nd District race before the creation of the 4th District, which includes Valencia City.
Peduche, who has long made known his wish to run for the new Congress seat, has not filed his COC and the Comelec resolution was silent on the case similar to his. He said he did not file a COC under 2nd District because he toyed with the idea that candidates could still file COC for the new district after the October 5 deadline.
Peduche assailed the Comelec resolution that he said deprived him of his right to run under the new district.
Marisa Estrella -Peduche’s wife earlier filed her COC for City Councilor in Valencia City.
Agripo, running under the banner of Liberal Party which is allied with Zubiri’s Bukidnon Paglaum Party (BPP), said he was happy that the peopleof Bukidnon has added their voice in Congress with the creation of the new district. Agripo was the district political officer for six years of Senator Teofista Guingona when the senator was still a congressman.
The young Roque, an independent candidate, is a pro-environment advocate who wants to contribute to the development of the new district.
MEL N. VELEZ

VALENCIA CITY – The Sangguniang Panglungsod is strongly supporting the release of funds for the P181 million by-pass roads that aim to free the national highways from vehicular traffic congestions, that was requested by Vice Governor Jose Ma. Zubiri Jr. and the Provincial Board from President Benigno Simeon C. Aquino III.
City Vice Mayor Azucena P. Huervas said she and SP members are to meet in a bid to strengthen the lobby for the release of the fund for the roads seen as a solution to traffic jams in Valencia’s national highways.
The P181 million fund is part of the P675 million asked by Vice Governor Zubiri and provincial board members in two resolutions submitted to President Aquino III.
The by-pass roads project involves the construction of an 18-kilometer road and four bridges at Dalwangan- Barangay Captain Angel-Camp Impalambong-Sta. Ana-San Jose route of Malaybalay City, and the Bagontaas-Lumbo section consisting of 7 kilometers and one bridge from Barangay Sugod passing through Barangays of Kahaponan, Sinayawan and Maapag.

MALAYBALAY CITY – A reforestation project aiming to mitigate climate change and global warming funded with Euro money is set to be launched next year, DILG Provincial Director Ronelo Alvarez told the officers and members of the League of Municipalities of the Philippines (LMP) Bukidnon Chapter during its monthly forum in Manolo Fortich.
The fund for the 15-year environmental project worth 87 million Euros to be handled by the Hiniliban Foundation and DILG will be spread among local government units throughout the country.
Bukidnon, whose advocacy for environmental protection, is among the beneficiaries of the project, said Alvarez. MEL N. VELEZ

PANGANTUCAN, Bukidnon – First Bukidnon Electric Cooperative, Inc. (FIBECO) held on October 5 a public consultation on its proposed 5MVA sub-station at Barandias, Pangantucan, as part of requirement in its application for Environmental Compliance Certificate (ECC) with the Department of Environment and Natural Resources (DENR).
The power generatiion project of FIBECO, now one of the country’s best performing distribution utilities, aims to further improve its quality services and increase power efficiency.
The consultation in Pangantucan showed tremendous community support for the project, said FIBECO Institutional Service Department (ISD) Chief Armand Cantoy.
Aside from backstopping power supply in Bukidnon, the Pangantucan 5MVA sub-station will also expand the distribution capacity of FIBECO in the towns of Kalilangan and Wao, Lanao del Sur which are under it’s franchise area.
This project is part of our corporate commitment to upgrade our facilities and equipment to improve performance and enhance services to our member-consumers, FIBECO General Manager Engr. Renato S. Cortezano said. MEL N. VELEZ

MARAMAG, Bukidnon – Construction of a perimeter in the Maramag Agro-Commercial Center has started in a prelude to the construction of the P105 million perimeter stalls project.
Municipal Engineer Tiburcio Macalam told the Durian Post workers are now securing the area for the 186 units of perimeter stalls.
The multi million project is an add-on component of the Maramag Agro-Commercial Center, which has the wet & dry market, food courts, ‘’ukay-ukay section and integrated bus terminal, Engr. Macalam added.
Maramag, the fastest growing and most progressive town in Southern Bukidnon, is undergoing drastic physical changes with various government projects being constructed.
The perimeter stalls project under a build-operate-transfer scheme funded by Land Bank of the Philippines (LBP) would be finished in 520 days by contractors FUCC and Abratique and Associates, Engr. Macalam said. MEL N. VELEZ 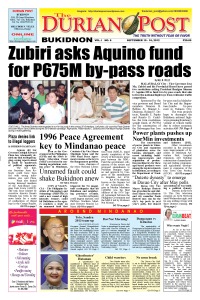 MALAYBALAY City – Vice Governor Jose Ma. Zubiri and his Provincial Board have passed two resolutions asking President Benigno Simeon C. Aquino III to fund two by-pass roads that aim to free the national highways from vehicular traffic congestions.
Sponsored by the vice governor and Board members Nemisio B. Beltran Jr., Manuel L. Dinlayan, Roland F. Detecio, Ranulfo E. Pepito and Renato D. Centillas, the twin resolutions sought funds of P675M for the construction of the Dalwangan-San Jose by-pass road in Malaybalay City and the Bagontaas-Lumbo by-pass road in Valencia City.
The Dalwangan-San Jose by-pass road worth P419M would fund construction of an 18-kilometer road and four bridges along the stretch of the Dalwangan-Barangay Captain Angel-Camp Impalambong-Sta. Ana-San Jose route.
The Bagontaas-Lumbo by-pass road consisting of 7 kilometers of road and one bridge costing P181M starts from Barangay Sugod passing through Barangays of Kahaponan, Sinayawan, Maapag and exiting in Lumbo.
The twin projects hope to decongest the Bukidnon national highways groaning from heavy volume of vehicle traffic due to robust economic activities.

The construction of power plants in Valencia City and expansion of plantation areas for banana, pineapple, and carrot including building improvements and acquisition of production machineries for these agri-based products were among the top investments in Bukidnon, according to the Department of Trade and Industry (DTI).
Other investments recorded in the province were improvements of facilities of Dahilayan Adventure Park, hospital expansion, new building construction of manufacturing and trading companies, and agricultural development or expansion of the One Town One Product (OTOP) of Talakag.
The investments in Bukidnon form part of a total of P9.81 billion invested in Northern Mindanao for the second quarter of this year as monitored by DTI.
The second quarter investment is higher by 138 percent, compared to the P4.12 billion investments poured in the region in the same period last year.
Reports from the DTI Regional Office 10 show that investment surges in the provinces of Misamis Oriental, Bukidnon, and Misamis Occidental pulled the overall performance of the region, despite the negative growths in Camiguin and Lanao del Norte.
Misamis Oriental shared 71 percent of the total investments, posting P7.04 billion and followed by Bukidnon with P2.32 billion or 24 percent. Investments in Misamis Occidental amounted to P265.12 million while Lanao del Norte and Camiguin posted P153.14 million and P20.29 million, respectively.
Director Linda O. Boniao of DTI-10 said investments in Misamis Oriental included the additional investments of Coca-Cola Bottlers in Villanueva town involving expansion and procurement of additional equipment; additional construction and expansion of tourism and business-related facilities such as Paseo del Rio and Centrio of Ayala; and development of new real estate lessors.
Investments in Misamis Occidental were mostly derived from firm level monitoring and business name registration, where most of the firms monitored or classified were under the service sector.

DANGCAGAN – The municipality of Dangcagan  in Bukidnon has won over the municipality of Kitaotao in a long-drawn boundary dispute that increased its territory to more than 43,000 hectares.
The decision on the dispute was issued recently by the Department of Environment and Natural Resources (DENR) based on cadastral surveys conducted in 2000.
Dangcagan and Kitaotao had been locked in legal battle on the boundary conflict for many years.
DENR-Land Management Bureau Region 10 director Ernesto Adobo Jr. said his office has already informed  the Department of Budget Management (DBM) Central Office about the decision on the Dangcagan-Kitaotao case and of the adjustment of land area under the jurisdiction of Dangcagan.
From an area of 11,000 before the DENR decision, Dancagan now has total area of more than 42,000 hectares. The dispute with Kitaotao involved about 34,000 hectares.
The victory also means for Dangcagan a bigger share in the Internal Revenue Allotment (IRA), representing share of local government units in locally-collected national taxes.
According to Municipal Budget Officer Leonardo Durog, Dangcagan was among 9 barangays that separated from the mother town of Maramag on July 1, 1931 through Executive Order No. 306 by then Governor General Butte.
On August 29, 1961, Dangcagan became a  regular municipality by virtue of Executive Order No. 444 by issued by the late Pres. Carlos P. Garcia. Vicente Cabiling was the first town mayor.
Kitaotao was a Dangcagan barangay prior to becoming a municipality on June 18, 1966. MEL N. VELEZ
————————————————– 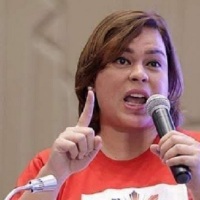 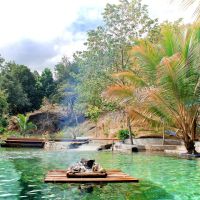