Rolly’ weakens further as it makes 3rd landfall in Quezon

Rolly weakened into a typhoon while Tropical Storm Siony slightly intensified as it entered the Philippine Area of Responsibility (PAR), the Philippine Atmospheric, Geophysical and Astronomical Services Administration (PAGASA) said on Sunday.

“Siony” is forecast to move generally northwestward at 30 kph with maximum sustained winds of 75 kph near the center and gustiness of up to 90 kph. It remains less likely to affect any portion of the country over the next two to three days, the PAGASA said. Read More

Super Typhoon Rolly  made its 2nd landfall in Tiwi, Albay, at 7:20 am on Sunday, November 1, bringing violent winds and torrential rain.

Its first  landfall  was in Bato, Catanduanes, at 4:50 am on Sunday.

The Philippine Atmospheric, Geophysical, and Astronomical Services Administration (PAGASA) said in a bulletin released past 8 am that Rolly is moving west at the same speed of 25 km/h, after hitting the municipality of Tiwi.

The super typhoon maintained its maximum sustained winds of 225 km/h, but its gustiness increased from 280 km/h to 310 km/h. It is the world’s strongest tropical cyclone for 2020, so far. READ MORE

LEGAZPI CITY –Evacuation in the island province of Catanduanes went on full swing as thousands of residents living in coastal towns and low-lying areas prone to storm surge, landslides, and flooding have been moved to safer grounds, the Department of the Interior and Local Government (DILG) in… Read More 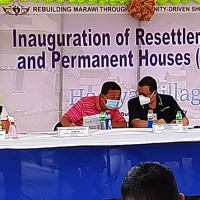