Rody Duterte: Kill my son Paolo if he is involved in crime 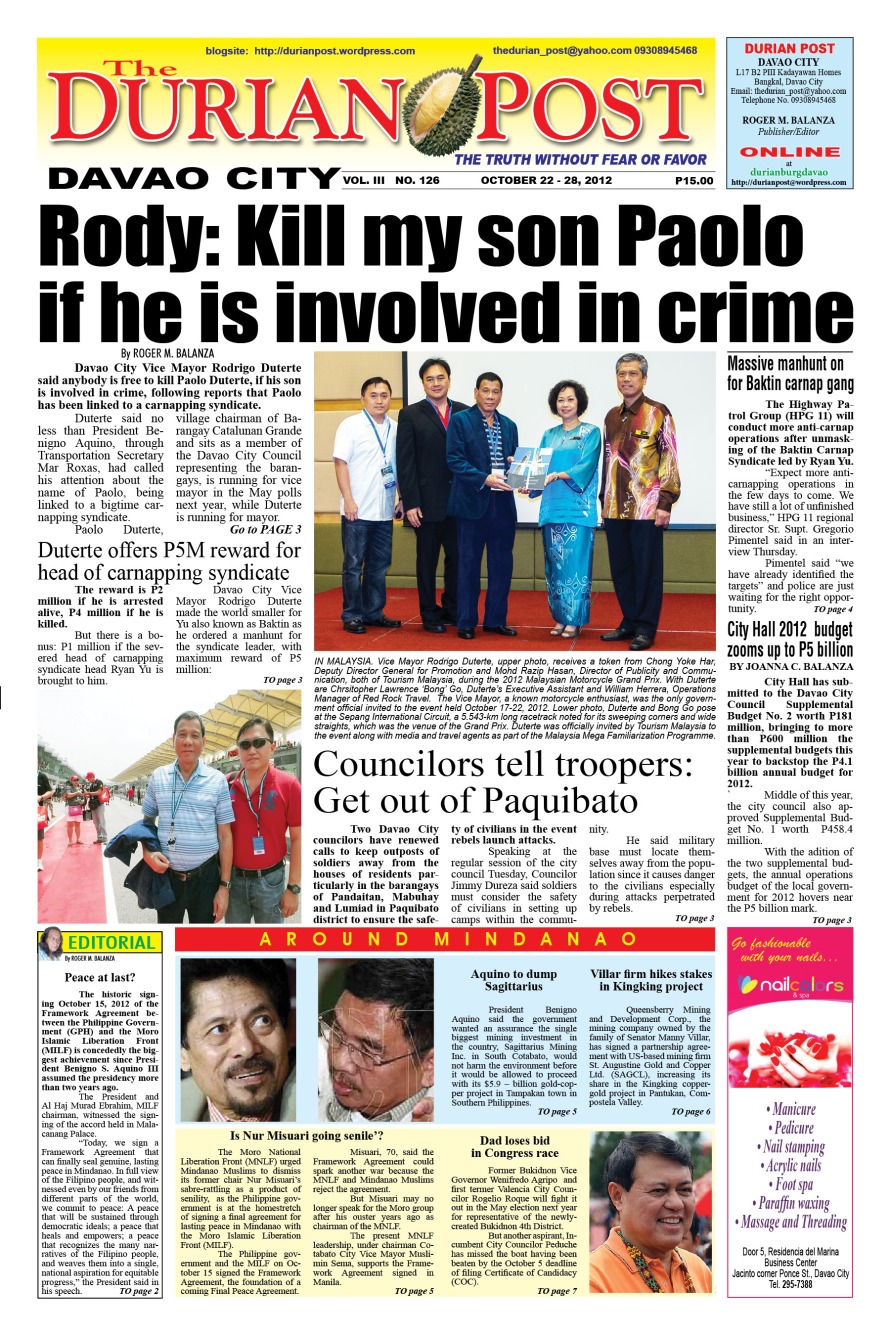 Davao City Vice Mayor Rodrigo Duterte said anybody is free to kill Paolo Duterte, if his son is involved in crime, following reports that Paolo has been linked to a carnapping syndicate. 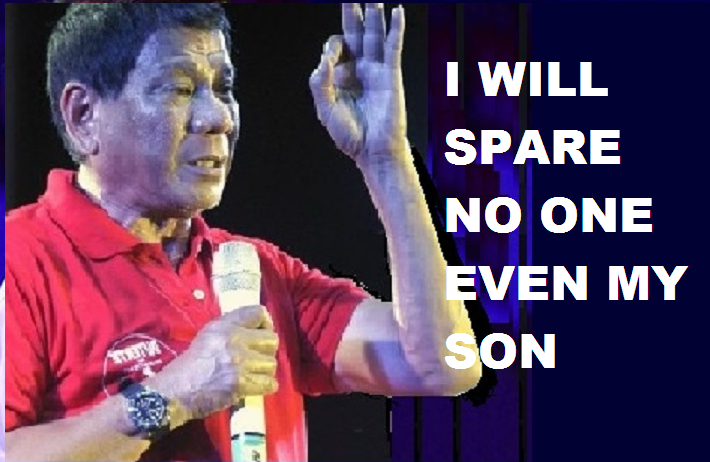 Duterte said no less than President Benigno Aquino, through Transportation Secretary Mar Roxas, had called his attention about the name of Paolo, being linked to a bigtime carnapping syndicate.
Paolo Duterte, the village chairman of Barangay Catalunan Grande and
sits as a member of the Davao City Council representing the barangays, is running for vice mayor in the May polls next year, while Duterte is running for mayor.
Duterte said he confronted Paolo about it and believed Paolo who denied the allegation and connection with a carnapping syndicate. 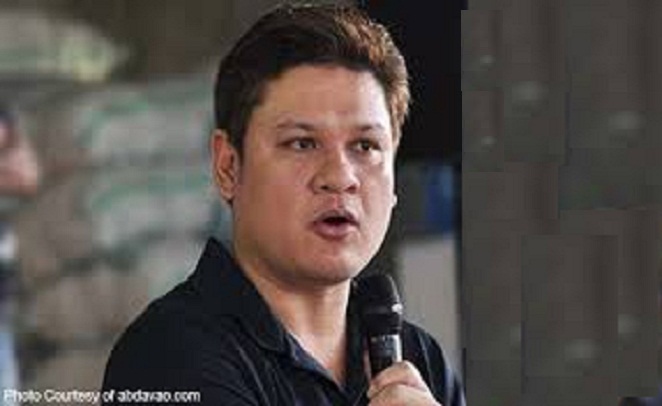 It has turned out that the carnapping syndicate reportedly had
been dropping Paolo’s name in its illegal activity. Roxas’ call to Duterte, expressing President Aquino’s worry over reports of Paolo Duterte’s link to the criminal syndicate, happened as authorities busted a bigtime carnapping syndicate said based in Davao City and operating nationwide.
You can kill Paolo if he is innvolved in carnapping or other crimes, Duterte told radio reporters on Monday this week after arriving from a trip to Malaysia.
While he was out of the country, authorities busted the syndicate headed by Ryan Yu also known as Baktin.
Duterte said the Yu group is insulting government law enforcers and putting Davao City to shame and has urged a manhunt for the syndicate leader who is at large.
Duterte said the syndicate operates elaborately, with specialized teams separately engaged in the snatching of the vehicles, registering them with the Land Transportation Office (LTO), tampering of the vehicle naumbers and plates and selling of the carnapped cars.
He said he was certain the syndicate had cahoots in the Highway Patrol Group (HPG) and the LTO.
The Davao City Police and CHPG, with Duterte tagging along, on Monday seized 14 carnapped vehicles from a car repair shop in Sarphil Subdivision at Barangay Wilfredo Aquino in Agdao, said to be Yu’s safehouse.
Yu’s syndicate was first revealed following the spate of carnapping incidents in the city and the arrest of four of its members by the Caraga Police in Tandag, Surigao del Sur who squealed on their leader.
Yu remains at large and the Bureau of Immigration and Deportation (BID) has been advised to place Yu in its hold order list.
Duterte said he met Yu years ago when he mediated a conflict between Yu and a policeman. The irate Yu, he said, verbally abused the policeman in front of him. He said that he did not know then about Yu’s activities,
Duterte said Yu befriends national and local politicians and had photos taken with them as a gate pass to pursue and curry favor for his illegal activities.
He warned Yu and his relatives, some of whom he said are members of the syndicate, to get out of Davao City.
Shape up or be prepared to……, he said in the morbid message relayed through the local media.
He also warned law enforcers conniving with the Yu syndicate.
In the raid in the Yu carshop in Agdao, authorities found 10 LTO-issued car plates and 11 duplicate keys of Toyotas, prompting HPG regional director Sr. Supt. Gregorio Pimentel to fan out the investigation to personnel of Toyota Davao and Toyota Philippines who could be involved with the syndicate.
Pimentel said the hunt for Yu now involved not only the police but as well as the Bureau of Immigration, Bureau of Customs, Philippine Coast Guard, Philippine Navy and even the Philippine Army.
The HPG said it has seized a total of 31 vehicles said to have been carnapped by the Yu syndicate, since October 18. Duterte has ordered police to inspect all car shops believed to be hiding vehicles carnapped by the syndicate. 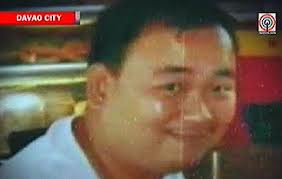 RYAN Yap Yu, also known for his alias “Baktin,” has become an instant celebrity of sort, after he was tagged to be the leader of a big-time carnap ring operating not just locally but also nationally.
But who is really this man? Yu, 32, is a son of a Chinese traders Doya and Vicky Yu, who owns the Ultrastar Grocery Store in Bagong Lungsod, Tandag City in Surigao del Sur.
Those who know him claimed that  the “Baktin” (piglet) nickname reportedly refers to his short height but big body frame. He inherited his height from his father.
The Yu family has been in Tandag City for decades already and gifted with four siblings – two men and two women – that includes Ryan. They were no longer Chinese-speaking but “Kamayo,” the dialect used by Mandaya people since Tandag is known to be populated with Mandayas.
Lately, the family built the Ultrastar Marketing, their second and bigger “mini mall” in the city engaged in selling groceries, ready-to-wears (RTWs), among others. But it is not engaged in selling cars.
The same establishment was the subject of police raid last week that resulted to the recovery of stolen highend  vehicles.
It was later known that Yu used the parking area of the mall to be the depot of the stolen items.
But according to his parents, they really did not have knowledge that their son was involved in a carnapping syndicate.
As far as they were concerned, their business is legitimate and that they have nothing to do with Ryan’s wrongdoings.
The two branches of Ultrastar are still open for business as of this time.
Ryan is known to be travelling from one place to another. He usually makes friends with politicians, police officials and even some media personalities.
Some were even aware that he became big-time because he was engaged in illegal activities but they just kept it themselves because they already received “grease money” from him.
But now that all eyes are training on Yu, they just claimed that they just knew him by name.