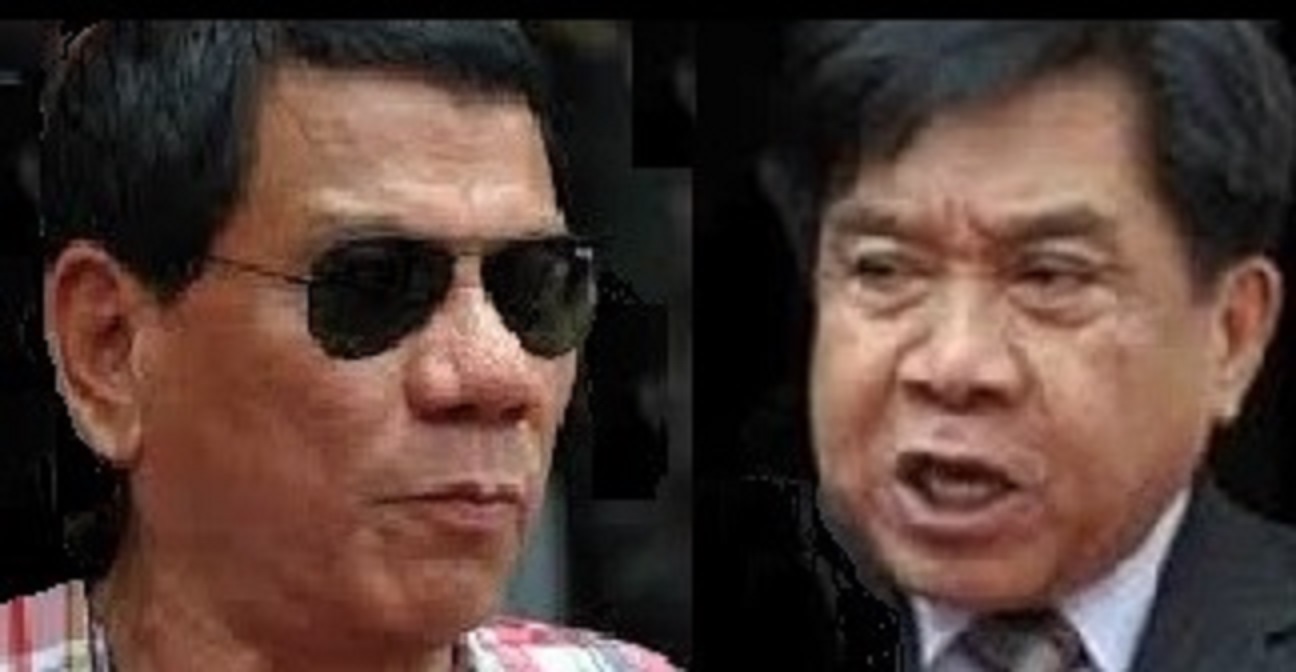 ED MALAY ON A COMEDIC RAMPAGE: PROVIDES DABAWENYOS WITH THE FUNNIEST PRESS RELEASE IN THE DAVAO CITY ELECTIONS

THIS JERK OF A PR MAN FROM MANILA WHO CONTINUES TO CLAIM THAT HE IS THE PR MAN OF FORMER PRESIDENT FIDEL RAMOS—DENIED BY FVR HIMSELF—IS AT IT AGAIN TRYING TO DUPE THE DABAWENYOS WITH RIGGED SURVEYS THAT SPEAKER NOGRALES IS WINNING IN THE DAVAO CITY MAYORAL RACE AGAINST VICE MAYOR SARA DUTERTE. 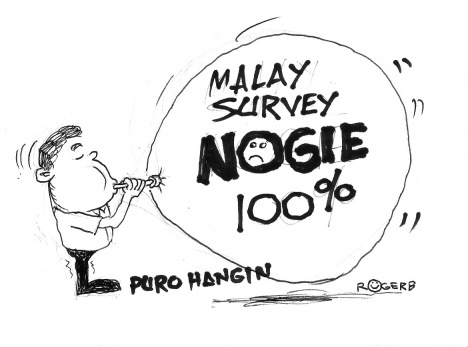 ED MALAY AND HIS ISSUES AND ADVOCACY CENTER ALSO KNOWN AS THE CENTER (OF DECEIT) IS ON THE BRINK OF BEING DECLARED AS PERSONA NON GRATA BY DABAWENYOS FOR HIS OUT-OF- THIS WORLD SURVEYS THAT SHOW NOGRALES WINNING DESPITE COLLATED SURVEYS OF INDEPENDENT OUTFITS  THAT SHOWED INDAY SARA WINNING 8 AGAINST NOGRALES’ EMMACIATED 2 PERCENT.

SENATOR NONOY AQUINO SAID THAT HE WAS HAPPY TO LEARN THAT MALAY HAD PREDICTED HE WAS GOING TO LOSE TO MANNY VILLAR. HE SAID MALAY’S SURVEYS WERE PERFECT EXAMPLES OF RIGGED SURVEYS THAT NEVER HIT THE MARK. IF MALAY SAYS YOU LOSE, YOU WIN.

THIS IS WHAT MALAY IS DOING TO DAVAO CITY AND DABAWENYOS SHOULD BE HAPPY THAT HE IS IN THE COMPANY OF NOGRALES. IF THIS NINCOMPOOP SAYS SARA WILL LOSE, THEN SARA WINS.

THIS IS THE LATEST DISPATCH OF MALAY, ONE OF THE FUNNIEST PRESS RELEASES OF THIS POLITICAL SEASON THAT WOULD BE SEEING PRINT IN THE MINDANAO INSIDER DAILY, SENT BY DURIANBURGDAVAO PIGEONS EMBEDDED IN MALAY’S RACKET OF RIGGED SURVEYS THAT HAVE SPEAKER NOGRALES AS A WILLING VICTIM BECAUSE HE KNOWS THAT HE IS GOING TO LOSE IN THIS ELECTION:

DAVAO CITY, Davao del Sur — Registered voters as well as the people of this city have expressed their dismay over the continued refusal of the Duterte father-daughter tandem to squarely address the many issues that have been raised against the city administration particularly those which concern the alleged illegal disbursement of funds of the city.

Ed M. Malay, director of The Issues and Advocacy Center (The CENTER), said this scenario has become evident in the way the issues that were thrown at the city administration have affected the local political
environment and this is very much evident in the results of its most recent survey conducted from April 10-18, 2010 out of a sampling size of 2,400 respondents that cuts across all demographic sectors which
has a margin of error of + 2.8% and a confidence level of in excess of 95%.

The 2,400 respondents were divided into 1,000 respondents in the first district and 700 respondents from the second and another 700 respondents in the third district. Malay said that the sampling size
or the number of respondents do not really matter in the conduct of surveys but in the methodology that is being employed when conducting surveys. A trained eye can immediately spot if there are deviations in
the results of the survey and this is why The CENTER also employs a talk-back mechanism to verify the authenticity of its extracted responses.

Malay said The CENTER has been conducting what he termed as “closed and dedicated surveys” sine 1992 which means that it conducts surveys only for the use and or appreciation of its clients that include
foreign governments, foreign embassies, foreign investment groups and some of the country’s top political leaders. The CENTER earned plaudits in the 2004 presidential elections when the results of the
pre-poll and exit poll surveys that it conducted approximated the actual electoral results released by the Commission on Elections.

The CENTER said that while this 14% lead cannot as of yet be described as comfortable given the capacity of the City Administration to influence the electoral results with its machinery, there is a very distinct
possibility that Nograles would be able to stretch this lead following allegations of unexplained wealth that was recently raised against Sara Duterte.

Malay who is also a member of the World Association for Public Opinion Research said Nograles scored heavily in the first district with 58% of the 1,000 respondents saying they will vote for Nograles as against
only 21% who chose Duterte. Nograles also is the preferred choice of 42% of the 700 respondents in the third district while 31% chose Duterte in the same district. Sara Duterte, however, carried the third
district but with a slim 5% margin over Nograles at 38% to 33%, respectively.

Former Mayor Ben de Guzman who is now running against the elder Duterte for the city’s second highest post has closed the gap between him and Duterte to just 4% with Duterte at 43% against De Guzman’s
39%. The vice mayoral elections, said The CENTER, is fast turning into an exciting electoral contest with the  city’s registered voters becoming more conscious and aware of the issues permeating in this
year’s political campaign. The prospects of De Guzman winning over Duterte is not really far-fetched as there is a high 16% of voters who have yet to decide on whom to vote for and victory for either Duterte
and De Guzman will largely depend on how they can gain to their sides the support of these undecided base of voters.

In the congressional elections in all three districts, The CENTER’s latest survey showed Atty. Karlo Nograles enjoying a huge 21% over Councilor Mabel Acosta at 52% to 31%, respectively. The margin
separating Mylene de Joya Garcia from Joji Ilagan Bian at 3% or almost within the margin of error placed at + 2.8% has become precariously close such that both congressional candidates in the second district
can be considered as in a statistical tie at 31% to 28%, respectively, while former Rep. Ruy Elias Lopez has increased his lead over Rep. Isidro Tom Ungab to 13% at 44% to 31%, respectively.

The CENTER noted in its survey results the growing disappointment of the city’s electoral base over the continued refusal of the Dutertes to face squarely the many issues that have been raised against the
City Administration in recent weeks particularly the COA report on the case of the missing equipment worth P2.9-billion that was supposedly purchase by the city government over the years, the alleged misuse ofthe P11-million from the city’s Special Education Fund (SEF) that was allegedly spent for parties and, the glaring overprice in the price of garbage bins that were purchased by the city government from hardware
stores that are patronized by city officials.

Compounding the problem of the current city administration, said Malay, is the most recent report on unexplained wealth that was leveled against Sara Duterte arising from the inconsistencies in the
data reflected in the statement of assets and liabilities (SAL) that are filed with the COA. The refusal of Mayor Rodrigo Duterte to takeup the challenge hurled by retired police Maj. Gen. Eduardo Matillano
has also caused a dent in the tough guy image projected by the elder Duterte.

But what may appear to be the most serious issue that has affected the once favorable perception of the public towards the Dutertes were the allegations of an unholy alliance between the city administration and elements of the communist New People’s Army (NPA) some of whom were even employed to form part of the dreaded Davao Death Squad (DDS) which, according to the Human Rights International, is responsible for the numerous unsolved salvage cases in recent years.

The CENTER reported that some 2,400 registered voters have responded to the pre-poll survey that it conducted in all the three congressional districts of this city and that the results clearly reflected the issues pervading among the city’s registered voters. These issues that have persisted since these were exposed not only shocked the people of this city but who were aghast at the magnitude of the graft and corruption pervading in their city government.

Malay who has been the PR and Media Adviser of FVR since the 1992 presidential elections also explained that each of the respondents were asked if they have either read in the local and national newspapers including tabloids, heard on radio and or came across on television the recent news reports and or commentaries on the issues pervading in the city such as graft and corruption, human rights violations related to summary killings or salvaging and some 98% of the respondents said they are aware of these issues.

This high awareness rating on the many issues that have been raised and or aired in recent weeks, said Malay, may have created an impact on the perception of this city’s voting public in terms of how they
perceive the candidates who will be vying for the elective positions that will be contested in this city in the scheduled May 10, 2010 polls.

Malay said there seems to be a very dramatic and significant shift in the position of the voters in the city following allegations of graft and corruption that has been hounding the city government in recent weeks and which the Duterte Administration refuses to address and this has a bearing in the way the voting public
behaves as elections are always driven by the flow of information and in the way that issues are raised.

Malay also said that pre-poll surveys cannot also be dismissed as inconsequential because surveys are like a road map and intelligent candidates can take advantage of poll surveys because it provides them with the statistics with which they can base their campaign strategies. There is also a very distinct possibility that poll surveys could represent the existing political reality.